"Submit yourselves
there to God.
Resist the devil,
and he will free
from you."

“For I am persuaded that neither death, nor life, nor angels, nor principalities,
nor powers, nor things present, nor things to come, nor height, nor depth,
nor any other creature, shall be able to separate us from the love of God,
which is in Christ Jesus our Lord.”

A wife borrowed her husband’s brand new car, and she wrecked it. It didn't hurt her, but she just demolished the car. She felt so bad. She reached in the glove compartment where they kept their insurance papers and got them out.

When she opened the papers, there was a note right in the middle written by her husband. I think it's one of the sweetest things I've ever heard. He had written, “Remember, Sweetheart, it's you I love.”

Isn't that great? He was saying, “This car is not important. Honey, you're the important one.”

I want to tell you, you may have wrecked your life, but God says, “It's you I love.” God loves you. Whatever comes your way today, you must believe that.

Devotion used by written permission of Love Worth Finding.


"We ought to be living
as if Jesus died
yesterday, rose this
morning, and is
coming back this
afternoon."

- Adrian Rogers
Posted by Allen Pearson at 4:00 AM No comments:

The Story of the Bible
By Billy Graham

If this Gospel is hidden today from anyone reading these words, it is hidden because you have never opened your Bible—or you have opened it with a closed mind.

And the Bible says the only way to bridge the gap between us and God is through Christ. Jesus said, “I am the way, the truth, and the life. No one comes to the Father except through me” (John 14:6).

Today you can accept the Christ of the Bible. You can know peace of soul, peace of conscience and peace of mind by letting Him come into your heart by faith. Will you now, as you read these words, open your heart to Christ?

Dear God, thank You for the Good News of the Bible,
that through it we find our way to You.
Thank You that in its pages we can see Jesus and we can have peace.
In Jesus’ Name.

To learn more about God's Plan of Salvation and repentance, please visit Peace With God!

Devotion used by written permission of Billy Graham Evangelistic Association.
Posted by Allen Pearson at 4:00 AM No comments:


My dog Noah and I like to head out on Wednesdays to explore our universe and "hunt" trains. By "hunt" trains I mean we try to find them throughout the Virginia-West Virginia area. Once we find one, we photograph it and look for another.

When we are out exploring and hunting, I look for churches alongside the country roads we take. "Church Among the Trees, Emmanual Episcopal Church, Delaplane, VA" was stumbled upon after sitting by the railroad tracks in Rectortown, VA. Its beauty was nestled with the trees which, to me, added to its beauty.

When you get a moment, I would appreciate it if you would visit my photography website, www.allenpearsonphotography.com. If you have questions on purchasing my work, please visit the "Contact Me" page.

To see more of my photography, please visit, www.allenpearsonphotography.com.
Posted by Allen Pearson at 4:00 AM No comments:

"All Scripture is
breathed out by God
and profitable for
teaching, for reproof,
for correction, and
for training in
righteousness, that
the man of God may be
complete, equipped
for every good
work."


A few years ago, I discovered the awesome adventure of watching trains go through the Horseshoe Curve in Altoona, PA! My wife and I saw approximately 15 trains on the first trip and close to 20 the second one.

This year, since I had two other trips planned, I didn't go to Horseshoe Curve in the Spring. Huge mistake! In the middle of the summer season gets a bit busy so I will have to wait until the Fall to go north.

I photographed several trains, especially locomotives, that day. When I photographed NS 9233 and NS 9973, I was photographing into the sun. Having recently read an article about sunspots and glare in photography, I kept shooting to see what I could get. I think it turned out pretty awesome.

The result is posted above. What do you think? Please share in the comments below-

My work is available on traditional archival quality paper, canvas, metal, and notecards. I offer other products which can be found at www.cafepress.com/AllenPearsonsPhotos. To learn about purchasing printed products, contact me at allenpearsonphotography@gmail.com.
Posted by Allen Pearson at 4:00 AM No comments:

A few weeks ago, I returned from an African Safari. My wife found the trip through Living Passages and Answers In Genesis. We were familiar with Answers in Genesis so it’s what got our attention.

We flew out of a local international airport to Istanbul, Turkey where we had a 10-hour layover. Not as bad as it sounds since the airport has a hotel within it where you can get a few hours of rest if you want. We took the opportunity and rested before boarding another plane for another 10-hour flight to Johannesburg, South Africa. Our final destination was another town 4-hours north and the Zhikaru Lodge. By the time we arrived, I felt like I had traveled to the ends of the universe! The distance traveled really made my home town in Virginia seem really small.

The week was full of awesome adventures. My wife and I got to sit in on a few discussions about God’s Creation of the Universe with Answers in Genesis several times. We went on several game preserve-type safaris where we saw many animals up close, and almost, personal. We saw elephants, lions, cheetahs, impalas, giraffes, and so many more animals. It seemed we were always in the wild looking for animals. I marveled at some of the landscape too. A mountain named, “Hanglip Mountain” because it suddenly protrudes into the air over the height of the other mountains. I thought it was something man-made since it was such an obvious design or look.

We had an awesome opportunity to meet other people in the travel group too. I was amazed at how much kindness was shown to us. Normally, I am not much for meeting others and having a discussion with people I don’t know. Even then, it’s brief to the point and be on my way. It’s never ever meant as anything against the other person, I’m just an introvert who often relishes his quiet time or time alone- except I always like and want my wife’s company.

The week in Africa was quite a bit of fun. The safaris were awesome and I actually enjoyed making some new friends. I kind of hated to see the week come to an end as we would all fly home to different homes throughout the United States, Canada, and England. I might not ever see them again. In this life...that is.

As a Christian, it is an awesome blessing to know that if I do not see them again in this life, I will see them in heaven! That is… if they have received the Lord Jesus Christ as their Savior. This would be true for any of my Christian friends that I have met along life’s way.

I have been blessed to have been a Christian since a young guy. I have known Jesus and seen Him working in my life in many situations. Though my life isn’t perfect, as I’ve had many challenges and life events just like everyone else in life, I have seen God work through those situations and always there for me. Loving God and having His Love isn’t something that is easily written about or described in a blog post. It’s is the most awesome experience man can know.

If you would like to learn more about God’s Love, Jesus, and becoming a Christian, please visit Peace With God.
Posted by Allen Pearson at 9:10 AM No comments:

"Finally, be strong in
the Lord and in the
strength of his might."


The All-Powerful God Loves You!
by Jack Graham, PowerPoint Ministries

"The LORD appeared to him from far away. I have loved you with an everlasting love; therefore I have continued my faithfulness to you."

Did you know that the most incredible love known to man can be yours? It’s the unconditional, unchanging love of God!

If we could only understand how much God loves us, we could be set free from disappointment in ourselves… and from the slavery of sin and rebellion.

God who is omnipotent and all-powerful loves you! His love is unconditional and unchanging. In Jeremiah 31:3, our verse for today, He said, “I have loved you with an everlasting love.”

If you ever doubt that God loves you, just look at the cross and remember His love. Jesus defines and demonstrated the love of God. Calvary is the heart of God beating for you. He loved you enough to step out of heaven and offer His sacrificial blood.

Did you know that the precious blood of Jesus has the power to cleanse… to wipe away sin… and to conquer death and hell? The blood gives power for freedom and the power to love others.

And not only can the blood place God’s love in us, but it can also share God’s love through us.

Have you experienced that love? You can. Just say this prayer:

Lord, I know that I am a sinner and separated from Your love. I believe that You provided a way for me to experience Your unchanging, unending love through the death and resurrection of Jesus Christ. I believe in and I accept your love today.

If you prayed that prayer of faith, you have just accepted God’s unending love. Congratulations!

SHARE THE UNCHANGING, UNENDING LOVE YOU HAVE FOUND WITH SOMEONE ELSE TODAY!

To learn more about God's Plan for your life, please visit PowerPoint Ministries with Jack Graham, New Life in Christ.

Devotion used by written permission of PowerPoint Ministries with Jack Graham.
Posted by Allen Pearson at 8:35 AM No comments: 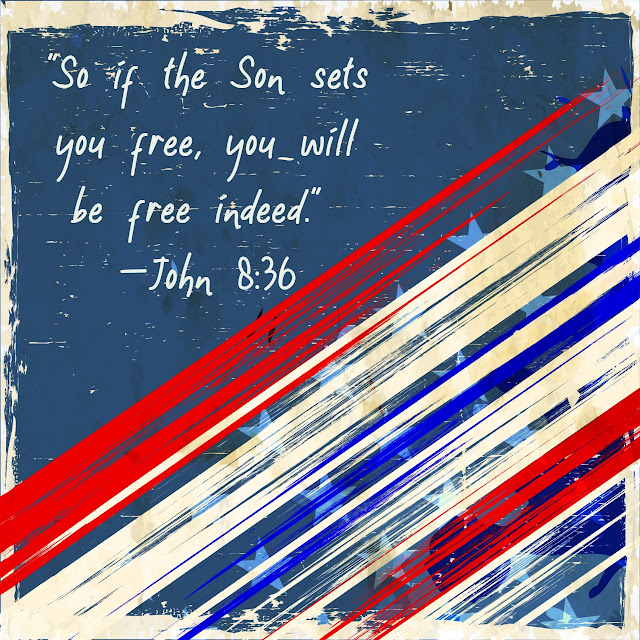 "So, if the Son sets
you free, you will
be free indeed."