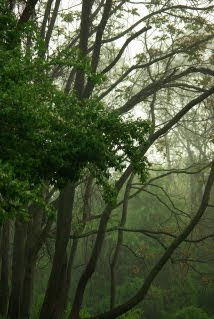 This morning's rain reminds me of a short walk I took the other day on my way to work. I was early, and there's a park that I like to walk through with my camera even when I have only a few minutes. It's a small park and not crowded early in the day. Later, it becomes a sports playground with fields for the local children which is great as they need a place to play. There's a dog park, too, off to the right which adds to the usefulness and fun of the park.
What's funny is when I am walking in the early mornings, I see all sorts of wildlife from birds to foxes to groundhogs to chickmunks and a gopher. I've managed to photograph some of these over the years that I have stopped at this park, but haven't gotten a really good image of wildlife yet.
Anyway, it was rainy and foggy the morning I stopped at this park. Seems the birds know before I get there that I am coming this time with my camera and hide. As I was returning to my car, I noticed the beauty of this image, the trees and fog caught my attention.
The purpose of my art is to find the beauty in nature, the unique beauty, something we miss as we go through our lives. This image is perfect. Simple, unique beauty.
Posted by Allen Pearson at 8:19 AM No comments: 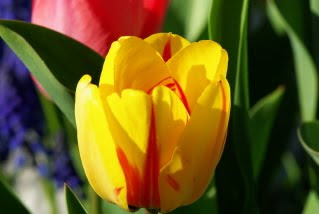 My neighbor has the most beautiful tulips in her yard each spring. After asking permission, I've spent quite a bit of time practicing my macro photography skills. This tulip was photographed in her yard.
Posted by Allen Pearson at 6:32 AM No comments: This image is a clemantis. I was able to get right on top of the flower to focus in on the center of it. my center point was the middle of the flower, so the rest of the image is a bit of a blurr.

Macro lenses are harder to use than other ones so a tripod is highly recommended. Or, use a chair to sit on, or even the ground, to get the close up of a flower or other plant. If sitting, hold the camera with your hands and place your elbows on your knees so you can have the stability of a tripod. Don't clinch the camera or hold to tight, but brace it and begin to shoot. I usually shoot about 3-20 images at a time depending on the subject. For example, if I can return to get another shot, as in with this flower I can go back to the garden where I took it and shoot again, I'll take about 3-5 shots. But, if I am photographing a praying mantis or a bee, I'll take upwards tio 20 shots to make sure I get what I want. As with many things, practice, practice, practice.
Posted by Allen Pearson at 5:05 AM No comments:

Spring is well underway! Flowers are blooming, grass in growing, trees are growing their blooms and then their green leaves and I am loving it. Thankfully, the winter, once again, went fast, Although all the snows seemed like it was an eternity. As I think I mentioned in another posting, I was certain we'd have snow on the ground until June.


Speaking of snow, my photograph of Snow at Walney won finalists at the Manassas Art Guild's "Art of Snow" photography competition. 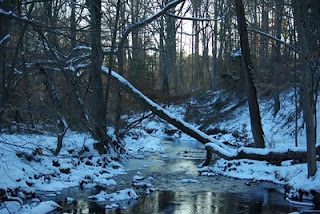 The competition ended last Saturday at the eARTh - Manassas Fine Arts Festival in Old Town Manassas. People attending the event were invited to vote for their favorite image.

I didn't win the Grand Prize, which was a photograph of a chipmunk poking it's head out of the snow as if to say "Is it Over Yet?" All the entries can be seen on the "Art of Snow" Facebook page and the finalist's can be seen at http://www.manassasartguild.com/.


The competition was a lot of fun and I am happy that Manassas Art Guild came up with the idea as it made a usually boring time of year, go by fast.

Way to go Manassas Art Guild.
Posted by Allen Pearson at 4:44 AM No comments: 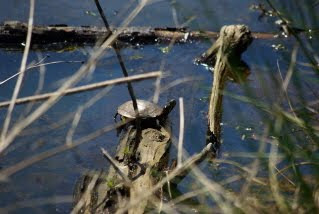 The moment of the year I look forward to is spring's arrival. Not just the first day of spring, but when you start hearing the birds singing, like the ones outside my studio window, the flowers and other plants start blooming and trees show off their beautiful flowers. I love walking through the local parks and see the earth coming to life after the winter, especially after this past winter with a record of 73" of snow.
Spring kicks off my outdoor festival season. This year, I started with an indoor exhibit at the Vienna Arts Center, "Creation Sings!!", 115 Pleasant St. NW, Vienna, VA, 22180, Tues-Sat., 10 - 4. My outdoor festivals start tomorrow, April 17, with the eARTh - Manassas Fine Arts Festival, at the Harris Pavillion, Center St, 10 - 3 p.m. Normally, the Manassas Fine Arts Festival is held in October but this year they've combined it with an earth day festival. The day looks like fun. And, as always, Manassas Art Guild who is sponsoring part of the event is a lot of fun to participate with.
The image of the turtle was taken during a walk at lunch. Looks like he is getting an early start on his sun tan.
Posted by Allen Pearson at 6:18 AM No comments: