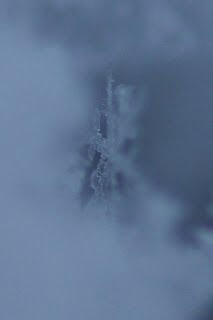 This winter is turning out to be the snowiest that I can remember here in the Northern Virginia area. I've lived here for 40 years and remember some pretty awesome storms, like the one in 1996 which was about 2 feet or so and was eclipsed by the Dec. 19, 2009 storm. Today, we are having another snowstorm, the second blizzard of the season which is weird because we rarely get one, much less two. I'm hoping that the month of March doesn't bring another one.

I've been trying focus on the beauty of winter the past few seasons since my friend Jaimi pointed out some of it's unique features. I have to admit, the adventure has caused me to go from an extreme dislike of the season to enjoying it quite a bit.

I have been working with my macro lens this season during the recent snows, January 30, 2010, to be exact, trying to capture something more unique than just a landscape. This image was caught during the January 30 storm. It was still snowing as I was photographing. I call it "The Flake".
Posted by Allen Pearson at 6:19 AM No comments: